Just a few days before last New Year’s Eve first heard about “Korcoin” (KOR) on popular local TV station[1]. This commercial was in Spanish where the lady presenting in the commercial claimed to give away $5 worth “Korcoin” if you installed a cryptocurrency wallet and messaged the number shown on screen, claiming that their “cryptocurrency” is the first to have its own store so where can spend their “cryptocurrency” for goods. Furthermore, they go on by claiming that you will have “earnings” on the short run by owning the coin.

I immediately looked at their social media pages[2][3][4], since at the time their website wasn’t live yet, I could see various photos and videos of people bragging with expensive goods, big luxurious houses, and cash money all while promoting the “cryptocurrency”. This by itself should set off red flags. 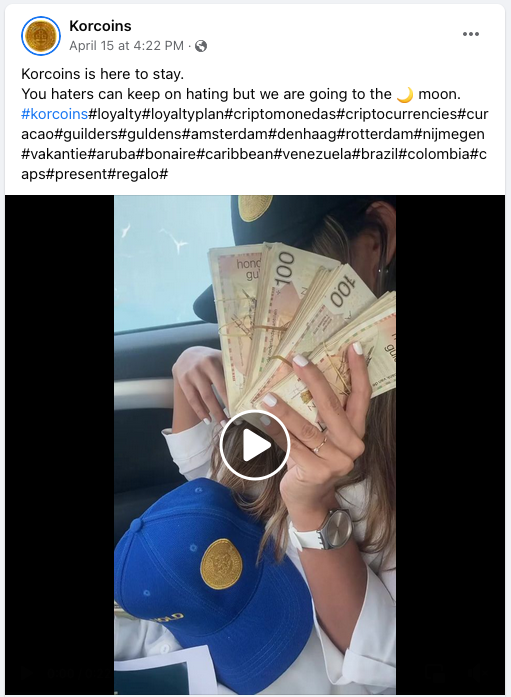 There were many of such tokens mostly around 2017 during the ICO (Initial Coin Offering) boom. During this time many tokens ware generated and hyped up with many promises on how they would revolutionize the world and make you rich. Obviously, this all went bust and most of these tokens are now completely dead[5]. Around this time there were many outright scams as well, one well known and which has taken the island by storm was OneCoin, which has been taken down by various authorities worldwide, and many arrests have taken place since[6].

At the time (around last NYE) I decided to ignore this hoping it wouldn’t catch on. Eventually after many weeks the was ad stopped being aired. I assumed “cryptocurrency” failed to get traction and would die a quietly. 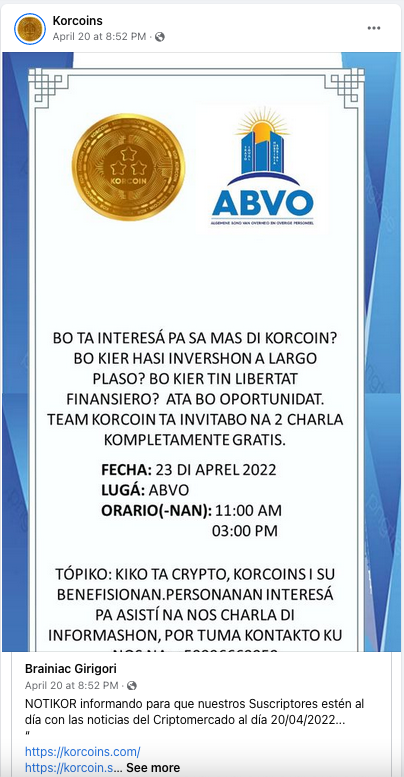 Unfortunately, just recently it was brought to my attention by a friend that apparently ABVO, the biggest civil servant union on the island, is being used to push this “cryptocurrency” to its members[7][8]. I found this to be an immensely worrying situation. People who know me know that I am a vocal proponent of Bitcoin and have been giving lectures, talks and been on discussions on the topic for many years. It is for this reason that I felt compelled to write this article to warn that this “cryptocurrency” looks allot like a scam.

The KOR token has been launched in October of 2021 with a supply of 200 million tokens on the Stellar Network[9]. This is a blockchain that allows for the creation of tokens on top of their platform. A token can be created at little to no cost using a few lines of code describing some characteristics of the token, such as in this case the creation of 200 million KOR tokens. All of these tokens ware on a single address[10] (comparable to a single bank account). Due to the nature of this “cryptocurrency”, all this information is transparent, and till date this address holds upwards of 199 million KOR tokens (99.5% of all KOR tokens).

How such scams work is that the creator of the token creates these out of thin air and sells them to the public. The creator(s) will push/market with false claims and promises, hoping their token gains traction, increasing the ask price, while dumping their assets enriching the creator(s) of the “cryptocurrency”. This is what is called a “pump and dump”[11]. 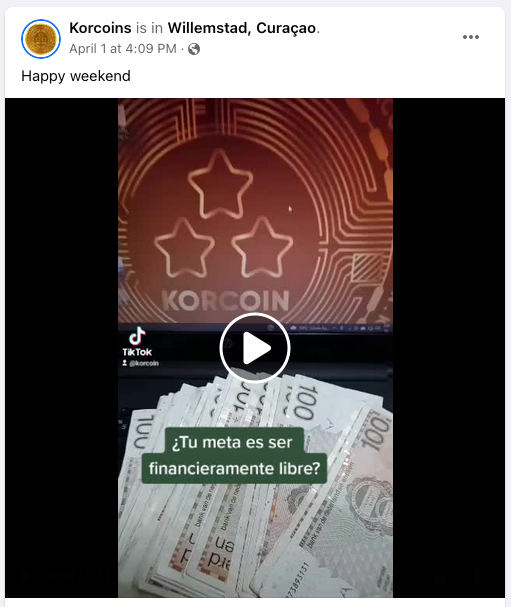 If we compare this to bitcoin: new bitcoins are made by a process called “mining”, where computers put work to solve complex mathematical formulas. This is what is called “proof of work”. Since this requires actual resources (computing power, electrical power, cooling and so on) this secures the Bitcoin network from manipulation and keeps the network decentralized[12]. Korcoin (KOR) is essentially controlled by a single entity making prone to manipulation, where Bitcoin is highly decentralized and non-manipulatable.

Please take the time to educate yourself on these technologies, join our monthly meetups[13] where we unpack and discuss the basics and current developments. And please don’t fall for get rich quick schemes. If it sounds too good to be true, it probably is too good to be true.

(feel free to re-post, share and translate this article, but please refer back to this page) 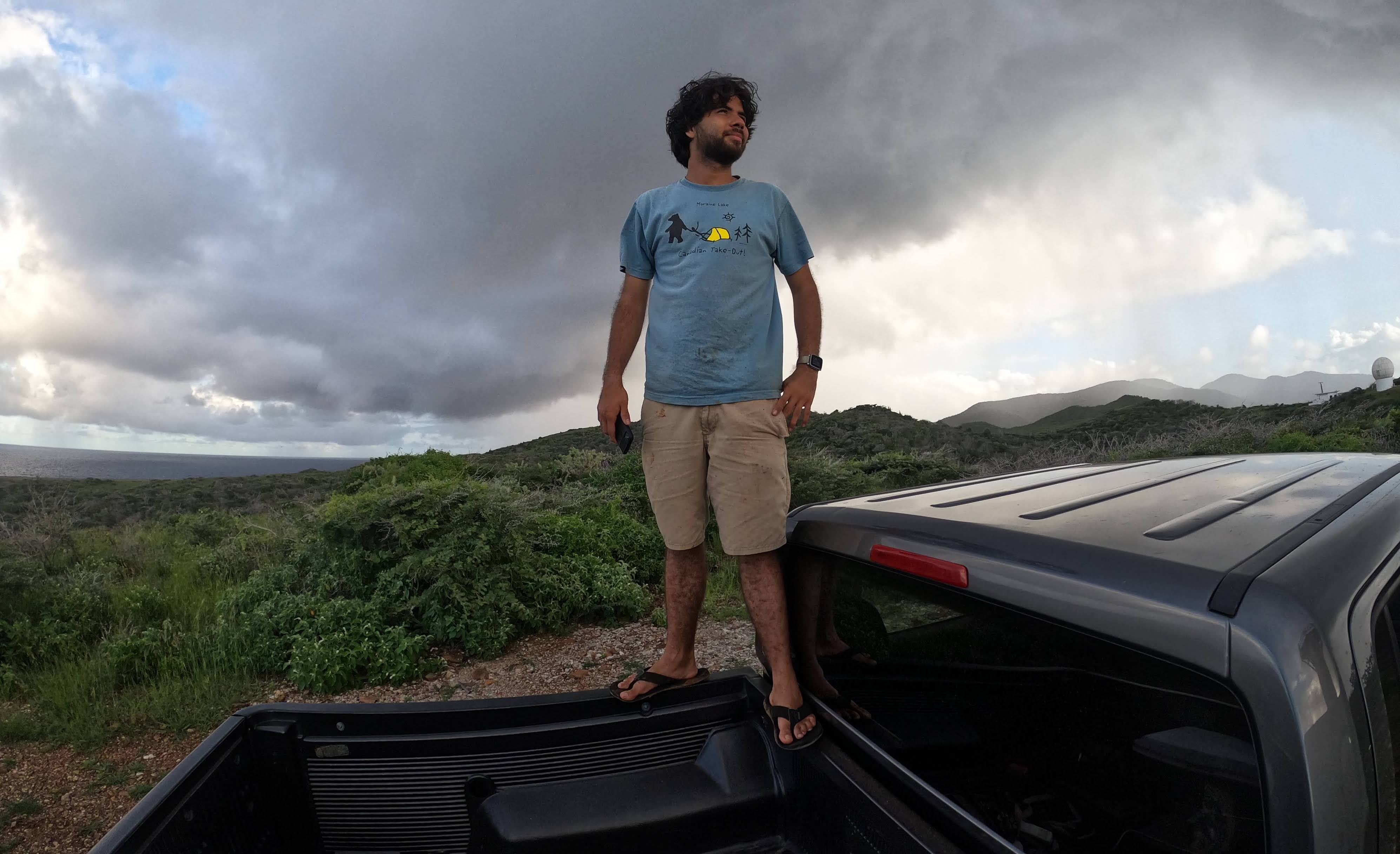 Michel is a ICT professional on the beautiful island of Curaçao. Founded Sincere ICT Solutions B.V. in 2013 from which we provide managed ICT services and consultancy for a wide range of customers.